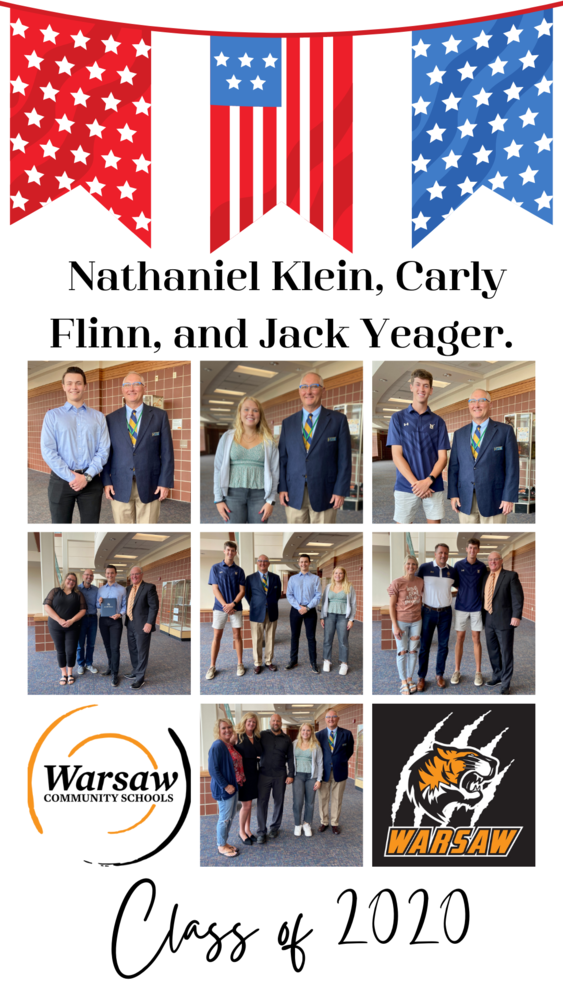 Warsaw Community Schools recognized three outstanding seniors at the 2021-2022 Tiger Way Convocation on Thursday, May 26, 2022.  WCHS Principal Troy Akers addressed the audience, and those watching in classrooms via live stream, as he recognized Nathaniel Klein, Carly Flinn, and Jack Yeager.  Principal Akers shared his appreciation for their courage, bravery, and leadership. Akers added, "As the year draws to an end, I’m always excited to see what the next steps for the seniors are. These three students today have received the highest award that any high school student can receive. I’m very proud of these young people and excited for their future."

Dr. David Hoffert, Superintendent for Warsaw Community Schools congratulated all three and explained, “As Warsaw Community Schools, we wish to commend Nathaniel, Carly, and Jack for their military academy appointments. Their dedication to academics and to service set them apart from thousands of applicants across the United States. We are very proud of their achievements and grateful that they will carry the WCS mission forward in their academy experience as a WCS graduate.”

Joining students, staff, and families in the Performing Arts Center auditorium was an honored guest presenter Bob Drummond, Blue and Gold Officer for the Naval Academy. Officer Drummond emphasized how special it is for any high school to have one student accepted into a service academy so having three is outstanding. All three will receive full four-year scholarships, housing, and other benefits. Officer Drummond went on to add, "It's truly an honor to be involved with three exceptional people. Warsaw should be proud!"

Nathaniel will be attending the US Air Force Academy. After the recognition, Nathaniel Klein joined his family and shared inspirational words for fellow students, "Push yourself and stick to it. It gets kind of difficult at times, but you don't know what's on the other side and you won't know until you try.” Nathaniel's proud parents are Aaron and Nicole.

Jack Yeager attended Jefferson Elementary School and Lakeview Middle School. Jack will be attending the United States Naval Academy. Jack Yeager added, "It’s been a long time dream of mine to attend the Naval Academy and I’m incredibly blessed to have received this opportunity. I can't wait to see what the future holds.” Proud parents Stephen and Megan were present to celebrate with their son.

Warsaw Community Schools would like to congratulate the Class of 2022 Nathaniel, Carly, and Jack on this exceptional achievement. Thanks are again extended to Bob Drummond, Blue and Gold Officer for the Naval Academy, and to the families of those recognized for this honor.